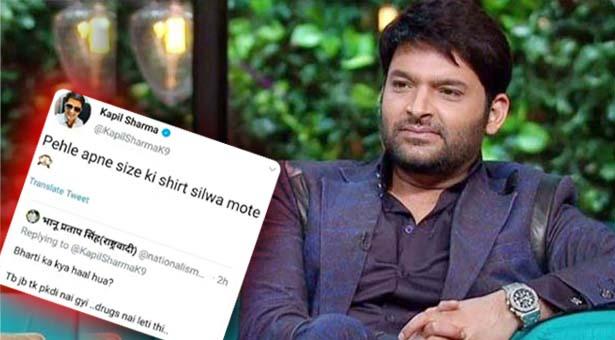 Another popular comedian Kapil Sharma can go to jail like comedian Bharti Singh. This was tweeted by a user named ‘Vanu Pratap Singh’. Although he has no evidence. Even then Kapil suddenly trolled and sat down. That is what the Indian media has learned.

In a comment box on Twitter, he wrote, ‘What happened to Bharati? They did not touch drugs until they were imprisoned. It seems that you will be in the same situation. As long as he is out of jail, no drugs. ‘

Kapil is very angry with this comment. He has trolled the counter with Vanu Singh’s face. In the counter comment, Kapil wrote, “First make a shirt the size of your body and get fat.” Kapil then deleted the tweet. He did not give much time to netizens. If so, let the storm begin. Kapil was able to guess the matter.

Earlier, the Narcotics Control Bureau (NCB) arrested Bharati Singh along with her husband on drug charges. They got bail after about a day and a half.